Section 1What She Does as a Curator

First of all, thank you so much for having helped us, the Hiroshima-3rd Generation Exhibition, loaning exhibits from the Museum since the very beginning.   When did you start working as a curator?

I started when I was 23 years old.  I started at the Outreach Division at the Museum and was transferred to the Curatorial Division seven years ago. 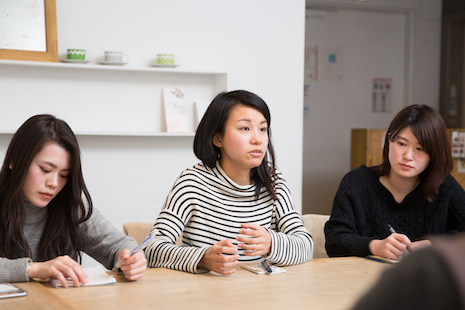 Did you want to work for something related to peace?

Curators are interested in a variety of areas such as modern history, medieval history, art history and science history.

I liked history and was interested in working at a museum.  In addition to that, I’m from Hiroshima and have grandparents who are A-bomb survivors.  I felt that I wanted to get a job related to peace. That was the reason I applied to this Museum. 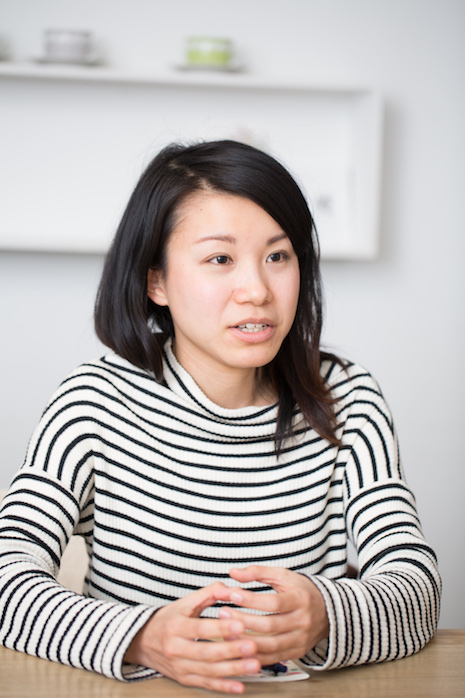 Could you tell us what you do as a curator in detail?

A curator is generally engaged in collecting, storing, displaying and researching materials for museums and providing education.  The curators at this Museum plan how long and what to have for permanent exhibits and rotating exhibits. We also work keeping archival materials.

What do you do to keep archival materials?

We control the air, temperature, humidity and pests in the storeroom.  We need to take special care of the archives which have already been vulnerable since they were damaged by the A-bombing more than 70 years ago.

Why do you think it is meaningful or important to keep the artifacts that survived the A-bombing?

I think the most important reason is that physical evidence will never return once it is lost.  Even if books, pictures or videos explain what happened in the past, nothing can tell us better than real items.  Seeing is believing.

Section 2About the Exhibits in the Museum

How do you decide what to display?

As for rotating exhibits, at the beginning of every fiscal year, the staff in charge of planning decides what to display and proceeds with the project.
Presently, the permanent exhibit section is closed for renovation, though.  (Note: The main building of the Hiroshima Peace Memorial Museum is under construction now, in 2018.)
Four curators, the supervisor and an exhibits maker have meetings on exhibition.
To be more precise, we curators listen to the opinions from the Advisory Panel, decide the outlook of how to display, and proceed with the project, consulting the exhibits maker.

Do you have anything particular in your mind when you think of what to display?

Most of the items displayed in the Museum are the donated artifacts of A-bomb survivors.
We meet the donors and listen to the stories related to the artifacts carefully when they are donated.
At the meeting, I especially think of what the most important message is for the donor or the survivor and try to reflect that message in the caption to the artifact.
In addition to that, I try to pass down the historical facts of the artifact as objectively as possible since the background is also very important. 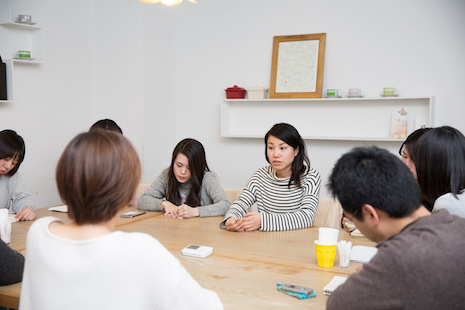 Have there been fewer cases of survivors donating their materials to the Museum in person?

Yes. Of course, there are still some cases, but recently, there are more cases that the younger generation of the survivors, such as sons, daughters, nephews and nieces, visit us, saying that they want to keep the memories of their family’s experience in the Museum.

So, you hear the stories related to the artifacts from people who are not A-bomb survivors, don’t you?

Yes. That will be one of the big issues we’ll have in the future.
When a survivor’s bereaved family donates his or her belongings related to the A-bombing, and if the family has heard his or her A-bomb experience or has found the accounts, it makes easier for us to know about the survivor’s life.
However, there are some family members who know the deceased was an A-bomb survivor but have never heard their stories. I keenly feel the importance of hearing survivors’ stories while they are alive.

Section 3About the Exhibitions Held Outside of Hiroshima and Abroad 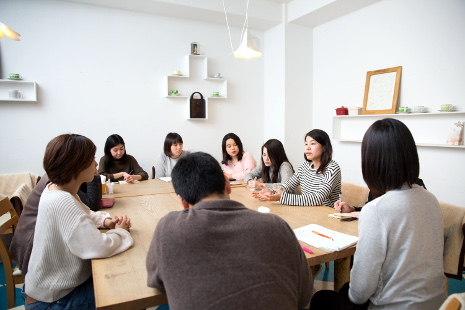 Yes.  Hiroshima City, together with the Museum, has been hosting rotating exhibitions outside of Hiroshima since 1996. I was involved with the project for five years.

I gave the greatest consideration to get the local people to have a feeling of closeness to what happened to Hiroshima.

For example, when we held an A-bomb exhibition in Niigata Prefecture, we made new panels to display related to Niigata.

Tell us what you made specially for Niigata. 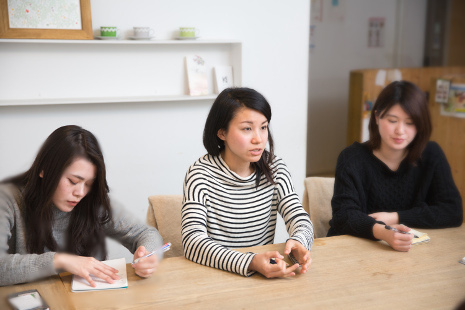 Niigata was one of the last targeted cities the U.S. chose to drop an A-bomb on.

Actually, U.S. aircrafts practiced dropping bombs, using so-called pumpkin bombs which had the same shape, size and weight as the Nagasaki type of the A-bomb.

We heard that the then-governor of Niigata evacuated the residents, in case Niigata became a target, after he knew the A-bombs were dropped on Hiroshima and Nagasaki.

We compiled this sort of episode and made panels.

When an exhibition was held in Morioka, Iwate Prefecture, we made new panels introducing a phrase in Hisashi Inoue’s book, Shonen Kudentai 1945, who was born in Tohoku.

How do you research the common interests of Hiroshima and other cities?

I use the peace database in the Museum’s website. (http://www.pcf.city.hiroshima.jp/database/index_e.html) This database has a keyword search function and also has titles of books. So, if you enter the name of the city you want to search for, you’ll hit something related to the city. It’s really convenient.

Have you ever been assigned to exhibitions held abroad?

Yes.  I didn’t lead the project, but I worked on exhibitions held abroad.
I was most surprised to see so many people abroad were interested in Hiroshima.  I feel the name of the city is known in every corner of the world.

How do people abroad who see the exhibition respond? 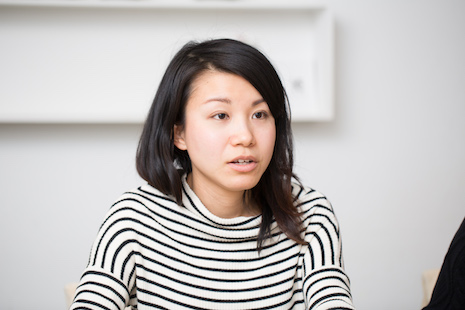 Many of them see our displays with sympathy, feeling sad and painful as human beings.

A lot of foreigners visit our Museum every year.
They look serious when looking at the displays. In their comments, many of them wrote honestly, “Never repeat the tragedy,” or “No war is right.”

Although it should be difficult for people with different religious, ideological and political backgrounds to discuss the theme of possessing nuclear weapons, their thoughts that what happened here was just a tragedy must be common.

Section 4About the Activity of Theater Group Flat

You try to covey what happened in Hiroshima through your theater activity as well as the work at the Museum.  Can you tell us specifically what you do?

On my days off, I work in an amateur reading group, Theater Group Flat.
At first, I took a backstage role, but I started performing two years ago. Our group puts on two different kinds of reading theaters alternately—works to pass down the A-bomb experience and works to show the pleasure of reading and performing.

Expressive activities must be a different approach to pass down Hiroshima’s experience from your job at the Museum.  What do you think is the difference?

Well, I can think of the A-bombing objectively and calmly at work while I can express my personal thoughts to it directly in the theater. I myself am the medium on the stage. I can express messages in works through my body.
I can seek ways more freely to convey the A-bomb experience in performance, bringing ideas with other members.  I think both are important for me.

Section 5What is Important to Convey

The older the A-bomb survivors are getting, the louder the voices for conveying the Hiroshima’s experience are getting.  Tell us what you think of conveying as a curator? 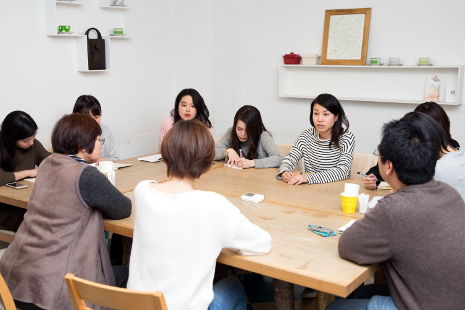 I think that the reason why wartime experience has to be passed on is that some problems about war haven’t been solved yet.
That means those unsolved problems are still problems up until now. Young people must realize that.

For me, the most important thing to convey is feeling the existence of the dead.
A survivor said in his speech, “You might think that I’m testifying my experience, but it’s not true. I’m not speaking for the sake of making myself understood but I’m speaking on behalf of the people who couldn’t get a chance to speak.  I’m telling my story because I want you to know that there were people who have died without telling anything.”
Hearing him, I felt awakened by the feeling which I had never had.